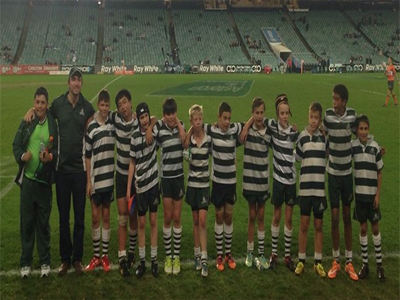 Trinity Grammar School’s Primary Sevens team has come along in leaps and kicks. After winning the Sydney Southern Zone Tournament earlier in the year the team qualified to compete in the NSW State 7′s finals. This was the first time a Trinity team had qualified and generated much excitement at the school.

The State wide tournament had 300 schools competing in regional and zonal competitions in the lead-up to the finals tournament. In the pool stages of the tournament, the team played a variety of schools, scoring comfortable wins. The semifinal was played against Scone Grammar, with the team starving the opposition of ball through terrific work at the breakdown. The final score was 5 – 2 to Trinity and as a result, they advanced to the State final played later in the evening at the Sydney Football Stadium as the curtain raiser to Waratahs and Reds game.

Prior to the game, the team managed to contain their excitement and, after a rousing haka from Mr Niulala in the tunnel, were primed to perform. The next fifteen minutes were magical. Trinity played a dominant match, once again limiting the opposition of ball and passing selflessly to record a 6 -1 win over Orange Public School.

As State champions, they received a tournament trophy and individual medallions. More importantly, they now have memories that they will cherish for the rest of their lives, this amazing shared experience forming a bond between the players that will last well beyond their school years.

Whilst there were some noticeable individual tries throughout the tournament, it was the less obvious skills of passing selflessly and competing for the ball at every breakdown which were the team’s point of difference from their opposition.

The playing group has been training since the beginning of Term 1 and all the players demonstrated great commitment and dedication to improving their skills. In the Easter holidays, they were also undefeated at the Armidale Primary Rugby Carnival. “As a coach, it has been a pleasure working with such a talented, committed and coachable group of players,” said Trinity Grammar School’s Mr David Alagna.