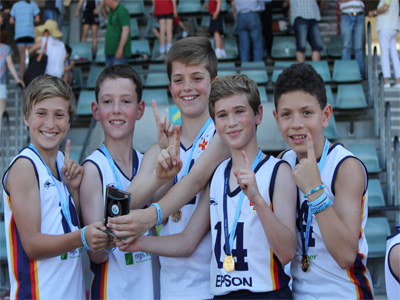 The Athletics season finished on a high for Barker College Junior School boys when the Senior Relay team took home gold – the 11th time in 15 years that a Barker team have won the NSW PSSA Championship.

Ten year old, Harry Anderson, won both a gold and silver medal, following outstanding performances in the U/10 Discus and U/10 Shot Put, respectively. Harry recorded the best four throws of the Discus competition, with a final winning margin of over 5m. His gold medal throw of 39.54m in the Discus was also a new personal best.

In the U/12 Discus, Timothy Mikhael won silver with his throw of 34.90m. Connor Bond also received a bronze medal in the U/12 Long Jump for his jump of 5.01m.

Barker College Junior School Athletics Coach, Mr David Forster said, “the boys have trained hard all season. The Senior relay team have been outstanding and to win the State Championship is amazing.”

These victories continue a long tradition of success at the NSW PSSA championships, particularly for the School’s relay teams, having won the State Championship 11 times in the U/10 or U/12 Relay in the past 15 years.