or
Login/Register via email
Home » Education Advice » Where Are They Now?

Where Are They Now? 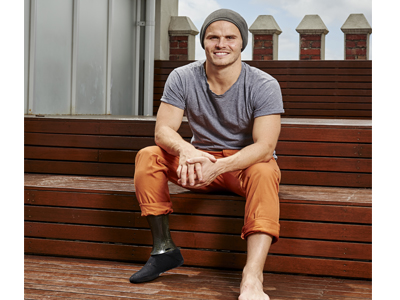 2 Graduates from Victorian secondary schools share their stories of success and inspiration in sports, and explain how their education got them to where they are today

Sam Bramham certainly entered Paralympic competition with a splash when he broke the 100m Butterfly world record at the 2004 Athens Paralympic Games. This was his first Paralympic games at the mere age of 16 all while still attending Ivanhoe Grammar School. Since then he has travelled the world claiming golds and breaking records at events such as the 2006 Melbourne Commonwealth Games, 2007 South African World Championship and 2008 Beijing Paralympics. In 2009 Sam was awarded with the Order of Australia Medal for services to his country and for being a role model for his younger team mates.

Sam was introduced to swimming while at school through the Ivanhoe Grammar Sports Program. After Year 12, Sam went on to study Architecture and then moved to a Sports Marketing and Law degree at La Trobe University. Sam now works in the sports sector, managing athletes, consulting and supporting young kids with disabilities. Sam also dedicates a lot of time to philanthropic and charity work, and plans to motor cycle around India in July 2015 to raise money for MS research. Sam attributes his interest in helping others through participation in Round Square programs while at school.

Former Ruyton Girls’ School student Kim Crow, reflects on her years at Ruyton as a holistic and nurturing experience that helped her to pursue her athletic dreams.

While at Ruyton Kim thrived both academically and athletically, as Dux of her year in 2003 with an ATAR of 99.95 as well as being a World Youth silver medalist in the 400m hurdles. When asked about her time at Ruyton she says there was always a culture of having a go both inside and outside the classroom.

Kim is now a World Champion in rowing, winning the blue-riband single sculls at this year’s World Championships in South Korea. She was the only rower to race in two events at the 2012 Olympic Games, and emerged with two medals – silver in the double sculls and bronze in the single sculls. In 2013 she was named the female crew of the year by FISA, the world governing body of rowing. She has since raced internationally in all Olympic boat classes, and has been elected Captain of the Australian Rowing Team.

Kim graduated from her Melbourne University Media and Communications / Law degree with first class honours and was the top female graduate for her year. She was an intern at the Court of Arbitration of Sport in Lausanne, Switzerland, and now works as a lawyer at Arete Group in Canberra.

Kim says, “School is as much about growing and learning about yourself as it is about formal education,” and credits her success to the years spent at Ruyton Girls’ School.