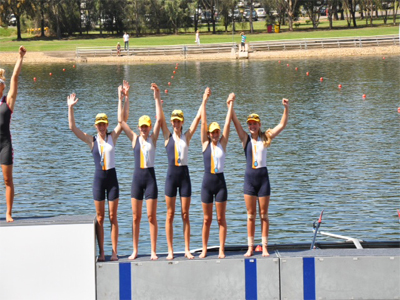 The Ruyton community is justifiably proud of the amazing talent displayed by their girls in the sporting arena. How often it is acknowledged that Ruyton girls ‘punch well-above their weight’ as a relatively small school holds its own against the many schools with whom they compete.

The final day of the Victorian rowing season ended with the full Ruyton rowing squad assembled at the banks of the Barwon River for the 31st Head of Schoolgirls Regatta. Each and every girl in the squad of 56 rowed their hearts out on the final day of competition. Never before has Ruyton won the ultra-competitive Year 10 Division 1 Quad Scull. It’s a super-tough task, as all of the quad scull schools are present, before some move off into the eight as seniors.

As Junior State Champions the crew of Bella A, Alannah H, Emily M, Eleanor P and Elise S carried the pressure that goes with that title into this regatta and into the final as the fastest qualifiers. Furthermore 500m into the race they found themselves substantially behind in second place. Nonetheless the crew stayed calm throughout the unfolding crisis and stroke by stroke clawed their way back into contention, moving into the lead and holding on for a famous victory! Celebrations, however, were put on hold as all three senior quads were still to race their finals. The Senior thirds finished with a silver medal and the Senior seconds received a bronze.

All eyes were now focused on the Senior firsts crew of Matilda A, Beth C, Alana G, Jean M and Charlotte W. Could they become the first Ruyton crew (Ruyton started rowing 24 years ago) to win the coveted Senior Division 1 Quad Scull title? The form guide suggested perhaps they could, however they had arrived at the final through an unconventional pathway. Unlike the other Victorian schools competing weekly on the local circuit, the Ruyton crew had raced little in Term 1, choosing only to compete at the NSW State Championships, which they won in emphatic style against classy opposition. If they were to become the first Ruyton crew to achieve this task they would have to beat a rival who was undefeated in Victoria for the entire season.

Following an unfavourable training row on the eve of the final, the crew found themselves up at 5.45am on race-day for a disciplined training session to remind them that no one was just going to hand them the trophy. It would prove to be the wake-up call they had to have. The session became their best row of the season with a flurry of emotions at both ends of the scale within a 12 hour period, less than 24 hours prior to the most important rowing race of their lives.

Four hours before the start each crew member received an inspiring and truthful text message from Kim Crow. Who else would you choose for a spot of advice on race day.

And so it goes: a story of a cox in her first season, a rower who turned 15 just before the new year, a highly regarded athlete in her first season with the crew and two elder stateswomen who endured the disappointments of last season forming a bond together that would see them attack the race with a maturity beyond their years, as they rated 31 strokes per minute, some five points lower than their opponents, to win with clear water separating them from the rest of the field.

Director of Rowing, Mr Matt Wilson, proudly said, “For many years I have dreamed of this moment and proudly, here we are!”