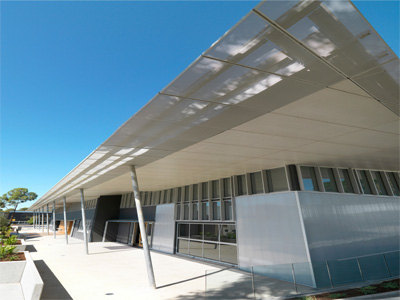 A school’s number one priority under any circumstance is safety; safety of the children and staff first, and safety of all of its belongings second. Yarra Valley Grammar has set the benchmark for advanced security with the installation of API Locksmith’s SALTO system.

The Maths and Science building, which has recently been re-opened by the Governor General Sir Peter Cosgrove, now features one stand-alone keyless system that is not only flexible and secure, but also a convenient alternative to the out-dated key control systems that are often used by a number of schools. This new system completely makes void the potential for staff members to lose their keys and compromise the security of the building.

Many schools have yet to upgrade to any electronic solution – making Yarra Valley Grammar ahead of the curve – which leaves them susceptible to security breaches as well as having little to no control over how many keys have been issued and are currently in use. The SALTO system also comes with a three main advantages that take a massive weight off the shoulders of all staff members, these include:

Yarra Valley Grammar absolutely pride itself on state of the art technology and facilities to make sure their students are given the best opportunity to achieve perfect results, and when it comes to making sure the equipment that does get used is kept safe, it’s no surprise YVG went above and beyond to ensure this.

Yarra Valley Grammar Facilities Manager, Mr Peter Tiberi, said that the school was looking for a system that was well rounded and easy to maintain in a bid to make sure the school’s unique facilities and equipment is secure, all the while still being cost effective and easy to use. After copious amounts of research, SALTO was the best choice.

“After a lot of research into the market, we found SALTO to be the most efficient system in terms of security, operation and cost,” said Mr. Tiberi. “The installation by API Locksmiths was surprisingly easy and we’ve had no issues with it at all. We installed the system across the building so it has full lock-down capabilities, and of course protects what’s inside as well”.

It’s no wonder Yarra Valley Grammar is so determined to maintain the security of their equipment, but more importantly their students, when 67 students in 2014’s Year 12 cohort scored an ATAR score of over 80 – the top 20% in the state.