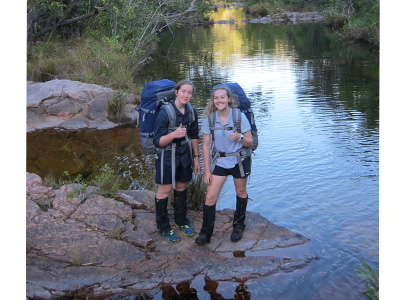 Recently a group of Ruyton Girls’ School Year 11 students and staff took the opportunity to visit Kakadu National Park in the Northern Territory. On the World Heritage List, Kakadu is a very special place due to its natural and cultural significance. The northern section of the park is wetland which beams with colour, tourist action and iconic Northern Territory features, including crocodiles. The southern section of the park is part of the Arnhem Land escarpment. The main event of the trip involved a seven day bushwalk on the escarpment. A permit issued by the traditional owners gave us access to one of the most beautiful and remote sections of the park and being on the escarpment, it was free of saltwater crocodiles. The walk was all off-track, with no signposts, track markers or any established camping facilities. To ensure our adventure unfolded pleasantly there was a large amount of planning and preparation done by all in Term 2. Preparation included a practice walk, which incorporated an off-track section, gear information and menu planning, including dehydrated dinners.

Mornings involved an early start, but not too early for a cup of tea from the billy on the fire. Walking off-track involved great physical and mental effort. Map, compass and land features dictated the mornings. The group walked efficiently and we reached our daily destinations by lunch, leaving the afternoons to be spent enjoying swimming holes, card games, songs, dancing and some tall stories. Over the seven day walk we saw no other people and were completely self-sufficient.

Aboriginal rock art also gave us a chance to ponder the significance of the first Australians and the timeless nature of the oldest living culture. Enjoying the afternoon shade of a rock wall and cooling in the same places as the traditional owners of the land added a realistic perspective to many discussions. The whole experience has given the girls a foundation of knowledge on understanding the complex issues faced by all Australians.

The greatest efforts usually produce the greatest rewards. This definitely proved true on the trip.