or
Login/Register via email
Home » School News » Learning with languages 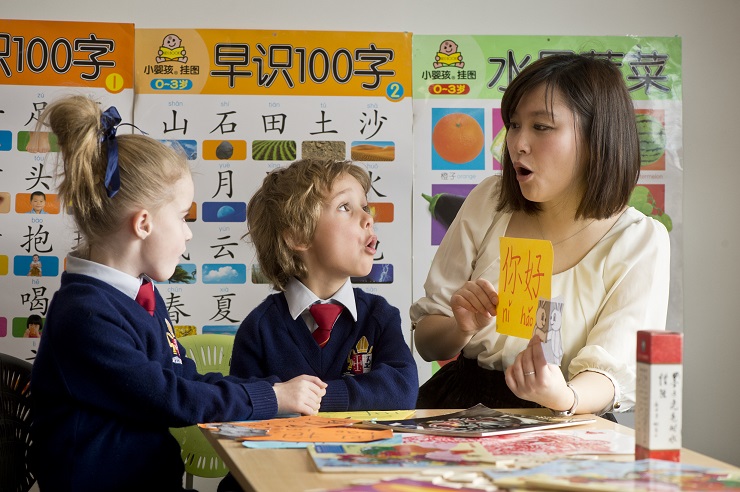 What is CLIL?
CLIL stands for Content and Language Integrated Learning. It is an internationally recognised method of teaching subject content, such as science or history, through a second language. The target language is used as the language of instruction to teach a subject or part of a subject. The focus is on achieving two sets of educational aims: students learning the new content and the language, at the same time. The content area can change over time, enabling the development of vocabulary across a range of learning areas. At Overnewton, all Prep students will learn Science through Chinese (Mandarin) as part of the Inquiry learning process. Their journey as compulsory second language learners will continue right through to the end of Year 8 in 2022, and thereafter they may elect to continue their Mandarin studies to Year 12 in 2026.
Both linguists and neuroscientists suggest that learning a second language is easier for young children. Giving students the best possible prospect of achieving success as language learners means that their Preparatory year is the time to start.

Recognising the increasingly important role of language education to the future prospects of students, Overnewton College has set out to develop high-level language and intercultural skills. For graduates to respond confidently to the challenges and opportunities presented by globalisation, the development of these skills is essential.

Chinese is one of the most promising language subjects in Australia. According to the White Paper, the government is building Asia-literacy in schools and has established Chinese as one of the four priority Asian languages. China is one of world’s strongest economies and its vast development will have a continued impact on Australia. In the future, Australia will need more people to speak Chinese and understand the culture in order to share the prosperity flowing from a deeper and broader engagement with China.

This challenge has inspired the creation of the CLIL Program. Lessons commenced in February 2014 with just one 10-minute session daily during the first few days of the Prep students being at school. After just six weeks of the initial orientation program, the Mandarin teachers at Overnewton were very excited about what the students had been able to achieve. “We only spoke some English on the first day, in order to quickly give students clear expectations and encourage them to learn a new language with us. Since then, we have been only using Mandarin with gestures when we are teaching them in the class. Students learned basic greetings with the song “Hello, My Friend”. Many students can greet us and follow simple classroom instructions, such as hands up, stand up, sit down and come here.”
By the middle of February, students were ready for the 25-minute daily lessons accompanied by their Home Group teachers: “They not only stay with us to learn Mandarin but also become our partners to model the language for students.”

The Mandarin teachers have been delighted to notice that students are spontaneously using their Mandarin vocabulary to respond appropriately to questions when learning in other classes taught by the Home Group teachers. This has established a great foundation for the transition into the CLIL program in second term, when the students will begin to learn the science content and the language at the same time.