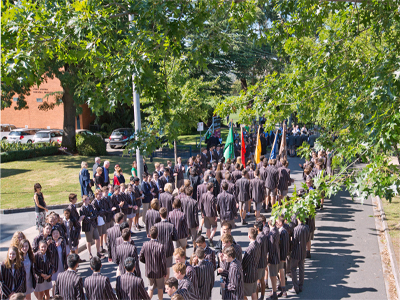 To commemorate the school’s rich history, a variety of celebrations were planned throughout the year

St James’ Church of England Grammar School for Boys was opened in 1915 by The Reverend Sydney Buckley, with fourteen boys in the initial enrolment. The school has certainly come a long way since then, with close to two thousand students over three campuses at the School today.

The first event on the calendar was an All School Event held on Thursday 5th of February. At The Ridgeway Campus, senior students processed from St James’ Church, the original site of Ivanhoe Grammar School, through to the South Ground, where a re-enactment of the first day was performed. At Plenty Campus, students, staff and parents enjoyed music and activities of the period, followed by a traditional smoking ceremony and symbolic cutting of the Centenary cake.

Monday 9th of February 2015 marked a very special occasion for the school as it was the Foundation Day. It seemed only fitting to commemorate the day by launching its history book ‘A Passion to Serve: 100 Years of Ivanhoe Grammar School’. Relatives of the school’s founding Principals, Reverend Sydney Buckley and Victor Brown were in attendance, as well the Reverend Charles Sligo and Rod Fraser and their families. The 2015 School Captains were also inducted on the Foundation Day with over 40 past Captains of the School in attendance from 1939 through to 2014, at a special Assembly held in Buckley Hall.

The next major event of the School’s Centenary year was the Old Ivanhoe Grammarians Association Centenary weekend which was held from Friday 20th to Sunday 22nd March. The celebrations began on Friday night with the launch of the Old Ivanhoe Centenary Golden Ale Beer, courtesy of Temple Brewery and the unveiling of the Centenary Faces project. This project captured a photo-story collage of alumni and creatively documented the wide-range of experiences and memorable people, places and things during Ivanhoe Grammar School days by taking a photo of alumni holding a blackboard revealing their School secrets or memorable moments.

On Saturday the celebrations continued with a variety of activities at both The Ridgeway and Plenty Campuses. At The Ridgeway Campus the School launched the Heritage Trail where visitors can discover more about the school’s long, rich and colourful history within the grounds of the current campus. One of the highlights of the weekend was the clash of great minds and intellects at the Huxley Debate, held in honour of former staff member, the late Peter Huxley. At Plenty Campus audiences were treated to a full dress rehearsal of the School musical production Guys and Dolls as well as student art displays in the Creative Arts Centre. A number of sporting events were also enjoyed by our alumni and competition was fierce amongst the players. The day was topped off by a sold-out dinner that was enjoyed by many Ivanarians.

On Sunday 22nd March a chapel service was held at St James’ Church, Ivanhoe which recognised the original site of Ivanhoe Grammar School and incorporated the unveiling of a Centenary plaque and a morning tea to follow. In addition, for those who still had the energy an alumni team ran in the Run for the Kids event.

Further events were planned throughout the year, including the first staff reunion which treated over 400 current and past staff to a cocktail party in the School’s Buckley Hall. A Centenary Gala was held in June and a Gala Ball in August and the year was topped off by a Teams of the Centenary event in October.

“The celebration of 100 years of Ivanhoe Grammar School provides an opportunity to reflect on the past, but also to recognise and celebrate the strength and vitality of the School as it is today,” said the Principal, Roderick Fraser.