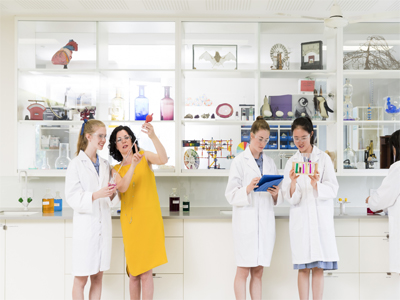 It is a concerning issue in today’s high-tech world that secondary school STEM units of science, technology, engineering and maths are still overwhelmingly dominated by boys. Boys outnumber girls in Year 12 physics by three to one and almost twice as many boys than girls study advanced mathematics in Year 12, according to a recent study*. Moreover, recent international testing has found Australian girls’ performance in science and maths is falling behind boys by at least a third of a school year. Even though popular culture tends to promote women in scientific roles – for instance, Dr Temperance Brennan in television show Bones and Dr Jemma Simmons among others in Marvel’s Agent of Shield – girls are seemingly finding it hard to identify with STEM subjects and careers.

Although the total number of Year 12 enrolments in Australia is increasing, enrolments in traditional STEM subjects are declining. This is why it is important to encourage programs such as the National Curious Minds Learning and Mentoring program for girls in STEM.  Starting this year on 9 December, 54 schoolgirls from more than 20 regional towns and every capital city across Australia will participate in Curious Minds at the Australian National University in Canberra. This pioneering program aims to help redress girls’ declining engagement in STEM subjects at high school.

The government-funded program will help Year 8, 9 and 10 school girls from diverse backgrounds to meet and be mentored by one of 124 women working in the science industry and engineering fields. Selected on their performance in three national secondary school based STEM competitions, the students will spend four days at the Australian National University for an intensive week of learning in physics, informatics, chemistry, biology, mathematics and earth and environmental sciences. There, they will also meet their mentors with whom they will work over a six month period.

Preference has been given to girls from rural, disadvantaged and Indigenous areas and backgrounds.

“Some of these highly capable girls have never had an opportunity to take part in this kind of extended learning, but now federal government funding has opened up this opportunity for them,” says Kyi Muller, Program Director, Curious Minds.

The program will put students in touch with inspiring Australian women in science, including: the 2013 Life Scientist of the Year, Professor Angela Moles; young innovators such as Microsoft technical evangelist Esther Mosad; and women working in fields as diverse as astrophysics, renewable energy and visual science communication.

“This program is all about helping to remove the barriers that are hindering our young women from excelling in science and maths at school, as well as opening up opportunities for them to consider study and careers in STEM,” says Dr Cathy Foley, Patron, Curious Minds.

Interestingly, STEM skilled jobs are growing at 1.5 times faster than any other job sector (Australian Bureau of Statistics). However, an incredible 44% of Australian employers report difficulties in recruiting STEM-qualified technicians and trade specialists, according to Australian Industry Group’s ”Progressing STEM Skills in Australia” report, March 2015. This demand makes it ever more crucial to encourage girls, half of our working population, towards STEM fields.

Curious Minds is funded by the Department of the Prime Minister and Cabinet, and the Department of Education and Training through the Restoring the Focus on STEM program. The Australian Mathematics Trust and Australian Science Innovations jointly administer Curious Minds. These organisations also reach thousands of talented students and involve hundreds of teachers and schools in the Science and Mathematics Olympiad programs.

* “The continuing decline of science and mathematics in Australian high schools”, Kennedy, Lyons and Quinn, Vol. 60, No. 2, 2014