Cool to be kind 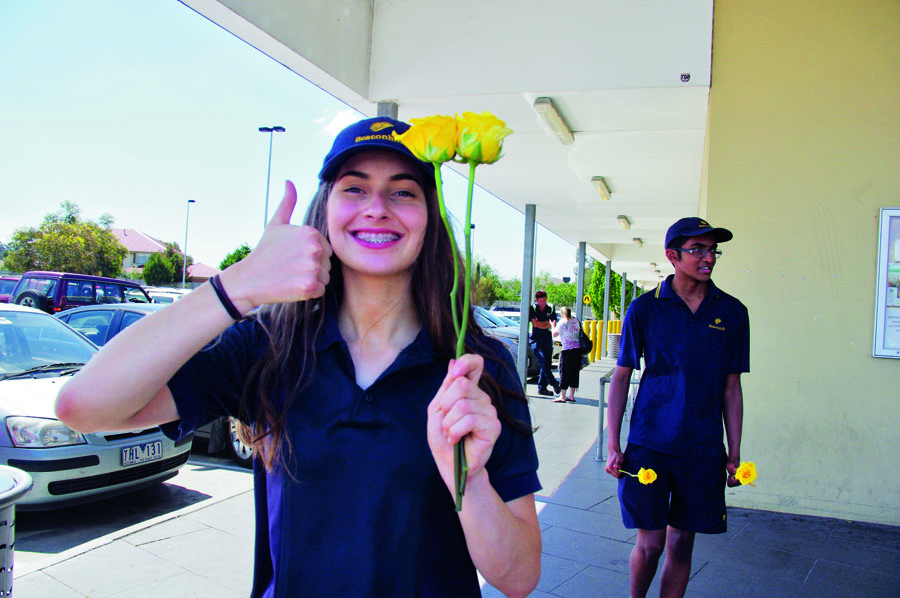 Year 9 students from Beaconhills College are challenging the stereotype of teenagers as self-centred people. Each year, they bring a ray of joy to strangers around Melbourne’s CBD by performing random acts of kindness.

The program involves students handing out simple gifts, flowers or even poems to strangers to spread some joy and positivity. It also encourages students to think of others.

Anne Field was approached by students Alex, Josh, Tyrell, Tyler and Chase in Bourke Street Mall recently and handed a chocolate and poem. She was so thrilled that she wrote to thank the school.

“I am a grandmother who rarely goes into the city but was there on Friday simply listening to the street music and ‘watching the world go by’ when I was approached by your boys,” she says. “They were extremely courteous and asked if I would be willing to accept a random act of kindness from them.

“They were responsible for ‘making my day’,” says Anne, adding that everyone “could do with a little more kindness”.

Beaconhills’ Head of Year 9 at the Pakenham Campus, Graham Broderick, says the scheme started five years ago when a student, on one of the school’s regular City Experience excursions, bought a bunch of flowers at the Victoria Market and gave them to a man on a park bench, who was delighted.

“People are sometimes scared of teenagers and don’t know how to respond to them,” says Graham. “But we know they have big hearts and we want to encourage them to think about others.”

He says other kindness gifts have included blankets and dog food. One year, a student made toffee apples and gave those away.

At the school’s Berwick Campus, Head of Year 9, Warren McLeod, says students give out flowers, chocolates and “happy messages” and do good deeds such as help people carry shopping.

“Citizenship and service” is one of the pillars of learning at Beaconhills College, which has campuses in Pakenham and Berwick.

Each year the college’s Year 9 students also raise thousands of dollars for the Salvation Army during a tin-shake on Melbourne’s streets.